Over the last couple days the Pulse site has been on and off. We’re sorry for the inconvenience. It seems our host had migrated us to another server and we thought that was causing the problem. Turns out that we have been taking on waves of attacks from multiple botnets. Not us personally but our host. Seems a hacker will Trojan a botnet into tons of unwitting systems and then call them up and turn them into an army of dark minions to attack thousands of computers at the hands of a spammer who has paid the hacker. They can be very resistant to anti-mal software. 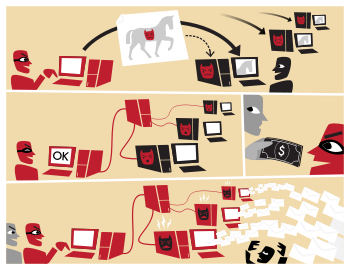 The whole thing sounds pretty cool, but not when it interrupts our site, point that shit at some people who deserve it like TMZ or the DMV. So with that said, “All hail underground basement hacker guy who botneted our host”. Now get your ass outside and get a girlfriend. That yellow ball of fire in the sky, it’s the sun.